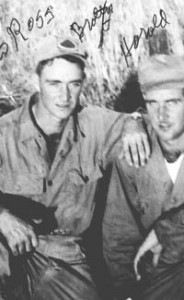 Milo James Ross was drafted into the army shortly after the attack on Pearl Harbor. He was sent to Fort Douglas and shipped out that same day to Fort Lewis, Washington. For the next two months, he went through a weapons platoon crash course. He trained on machine guns, mortars, and hand launchers. Ross quickly earned expert ranking on these weapons. Following basic training, Ross’s unit was sent to Barstow, California. Their training focused on digging fox holes.

Ross soon shipped out to the Hawaiian Islands, leaving behind his young pregnant wife. As his unit landed on the big island of Hawaii on July 4, 1942, a voice on the loud speaker said, “Sergeant Ross, congratulations. Your wife and son are doing well, and, one more thing, before you get off the ship you and your men have guard duty for the next four hours. Welcome to Hawaii.”

After a long training in Hawaii, Ross’s unit, “C” Company, 130 Infantry Regiment, 33rd Infantry Division, became part of the Philippine invasion force. They hit the beach in Lingayen Gulf and intensely fought their way through jungles and mountains to the inland city of Baguio.

Ross was wounded while tending other soldiers who were awaiting medical attention. He spent two months in a hospital while recovering from shrapnel wounds all over his body.

The day after Ross returned to his unit, they jumped into three months of fighting that only ended with the Japanese surrender at Luzon in June, 1945.

Company C, 130th Infantry Regiment was awarded a Presidential Unit Citation for outstanding performance of duty and superb courage during armed conflict with the enemy in their efforts to seize Hill X in the Bilbil Mountain Province in the Philippines. For his service, Ross was awarded the Purple Heart and the Silver Star.