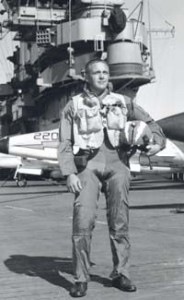 Francis Dee Roberge, a native of Salt Lake City, had a father who served in the Navy during WWI and WWII. So when Roberge graduated high school in 1951, he joined the US Naval Reserve as a radarman. He then graduated from the University of Utah’s Naval ROTC in 1955.

Roberge was commissioned and accepted into flight school, where he earned his wings a year later. He first saw combat when he deployed on board the aircraft carrier USS Coral Sea in 1966. He flew 229 combat missions over Southeast Asia in the A4E Skyhawk fighter bomber.

On one mission, his unit was tasked to attack a North Vietnamese missile site. As he and his wingman dived to look for surface-to-air missile (SAM) launchers, they encountered dozens of rapid-fire anti-aircraft waiting in ambush. Two large holes were in his wing and nose sections and one of his drop tanks was badly mangled. He let loose the drop tank and managed a landing back on his carrier.

During a night attack Roberge saw two surface-to-air missiles fired at him. They exploded under his plane. He and his wingman had the dubious honor of being the first to be shot at by SAMs.

The wingman’s plane exploded. The shrapnel hit the underside of Roberge’s Skyhawk, and punctured his drop tanks, causing his Zuni missiles to fire and igniting flares that were still in their wing racks. He jettisoned the remaining payload and headed back to the carrier safely. The next morning he learned that his wingman, Lt. Donald Brown, had been killed.