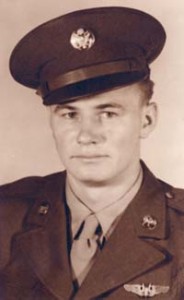 Kenneth Porter was a high school student when he saw his first B-17 Flying Fortress fly overhead and land at his hometown’s air strip. From that moment on, Porter pestered his parents to let him enlist in the US Army Air Corps. He was 17 years old when he left for basic training.

Porter desperately wanted to be a pilot, but was rejected for having sweaty palms. Although disappointed, he still wanted to fly and volunteered as gunner. After many months of training, he found himself assigned as a tail-gunner in a B-17 bomber flying out of Foggia, Italy.

Porter flew 57 missions for a total of 276 combat flying hours. On one raid, they were hit by flak that peppered the bomber from nose to tail. The first hit blew out the Plexiglas on the nose of the plane and both cockpit windshields, and wounded the pilot, co-pilot, navigator, and bombardier. The second hit knocked out two engines and damaged a third, wounding a waist-gunner. All the control cables except those leading to auto-pilot were severed.

The top gunner/engineer quickly engaged the auto-pilot, pulling the B-17 out of a downward spiral. Flying straight and level for the moment, Porter and the remaining crewmen reconnected some of the control cables.

For hours, Porter’s B-17 flew sloppily but controllable. As the bomber touched down on only one main wheel and a tail wheel, it “ground looped” several times before stopping just a few feet short of a row of R.A.F. Wellington bombers revving up their engines for take-off. The B-17 never flew again, which is not surprising since Porter counted over 300 bullet holes on the right side alone.