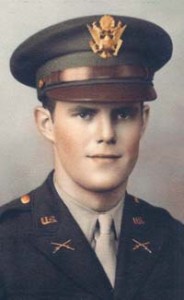 In April 1943, 99 members of the University of Utah class of 1944 Reserve Officers Training Corps were called to active duty. Donald Pickett was one of these cadets who had expected to graduate as a Second Lieutenant but instead was called to duty early as a Private. After basic training he was sent to several posts before being enrolled in the Artillery Officers Course at Fort Sill, Oklahoma. He graduated and was commissioned as a Second Lieutenant.

In January 1945, Pickett arrived in LeHarve, France. He was assigned to the 8th Armored Division as a replacement officer where he received his combat assignment as Platoon Leader, 3rd Platoon Company A, 7th Infantry Battalion, 8th Armored Division. Heavy action was just ahead for the unit.

In their last combat assignment, Pickett’s platoon was pinned down by machine gun fire coming from the top of a 500-foot sheer cliff. With his men immobilized and unable to target the gunners at the top of the cliff, Pickett worked his way behind the sounds of fire breaking into the open 30 feet behind the three machine gunners. Without back-up and armed only with a sidearm, Pickett stood behind a large tree and called out (in German) for the three to surrender. In a loud voice, he also gave orders in English to his non-existent men to, “HOLD YOUR FIRE!!”

The ruse worked. The machine gun was silenced; the gunners captured. According to Pickett, “It was a good day. No casualties on either side.”

During the occupation, he dealt with the German civilian population as Burgermeister of St. Andreasberg and later with defeated soldiers as Commandant of a German POW camp in Pilsen, Czechoslovakia.

From his unique perspective of having been a combat officer and then administrator over German civilians and soldiers, he says, “No matter which end of the gun you were on, each participant was a child of God.”