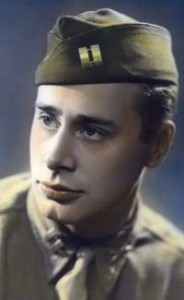 Paul O. Huber joined the Army in January, 1941 and was assigned to the Field Artillery, Fort Bragg, North Carolina.

On November 8, 1942, Huber and his men landed at Algiers, North Africa and captured an airfield. They fought with only small arms because the wrong ammo had been shipped and didn’t fit into the breaches of their cannons.

On July 10, 1943, Huber’s unit took part in the invasion of Sicily. During the brutal, six-week battle, Huber single-handedly manned a mountaintop observation post. Disregarding enemy shells raining down around him, he directed U.S. artillery on Nazi positions. For his gallantry, he was awarded the Silver Star.

On D-Day, June 6, 1944 Huber landed in the second wave of invaders on Utah Beach. Acting as the 9th Division’s liaison to allied paratroop forces, he forced his way inland to the French town of St. Mere Eglise and again was exposed to enemy tanks and artillery. For his actions he was awarded the Bronze Star.

At the city of Cherbourg, Huber helped accept the surrender of a German General and Admiral and the 4,000 enemy troops manning the garrison. Shortly after, he was given a battlefield promotion to Major.

Huber and his unit went on to fight in both the Huertgen Forest and the Battle of the Bulge. During March, 1945 his unit was one of the first to cross the Rhine River into Germany, utilizing the famed Remagen Bridge. He remembers watching the damaged bridge collapse, stranding U.S. forces in German territory.