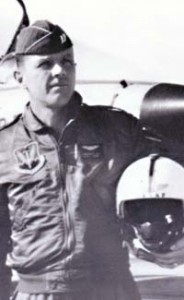 In 1953, Jay C. Hess became an Aviation Cadet. He received his flyer’s wings in 1955 and was commissioned a Second Lieutenant in the United States Air Force.

In the 1950’s and early 1960’s, Hess flew high performance jet fighters and mastered the all-weather F-89 and hyper-fast F-102 to defend the continental United States from potential intruding Soviet bombers. After receiving a B.S. degree in Aeronautical Engineering in 1962, he was re-assigned to fly combat missions in South-East Asia.

On one particularly important mission, Hess flew cover to help rescue two of his fellow airmen who had been shot down over extremely rugged, mountainous terrain.

On August 24, 1967, near the Chinese-North Vietnam border, Captain Hess was flying to help recover downed pilots. In his 31st combat mission, suddenly his jet fighter was hit by enemy anti-aircraft fire. Hess ejected at high speed from his cockpit at 7,000 feet. Several panels of his parachute blew out when it popped open. Hitting the ground too fast, he was knocked unconscious and lay there for hours while his fellow airman orbited desperately overhead attempting to rescue him.

Hess was captured first by Chinese, and then handed over to the North Vietnamese. He was taken to the infamous “Hanoi Hilton” POW prison. Enduring horrible starvation and torture along with his fellow Americans, Hess was held captive for 2,028 days. He was released on March, 14, 1973.