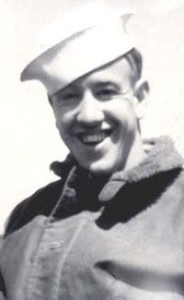 Keith J. Crawford joined the United States Navy in 1944, and received basic training in Idaho. He was then shipped to California and assigned to the USS Saratoga, an 888-foot aircraft carrier that was originally designed as a battle cruiser.

The Saratoga came under bomber and kamikaze attack on February 21, 1945. The first kamikaze plane hit at the waterline, killing all personnel in the fire room next to Crawford. A piece of the plane’s wing pierced the fire room where Crawford was, and he stopped the piece with his hands, injuring one.

The Saratoga was hit five times in three minutes, then twice more during the battle. Four kamikazes and three bombs shook the carrier. The forward flight deck was wrecked and was hit twice in the starboard side. Only 12 planes were able to take off; the rest were destroyed. The fires spread to the hangar deck, directly above the fire room where Crawford worked to keep the Saratoga moving. Despite the overhead inferno that was melting planes, the ongoing concussion from additional hits, and the fire from the room next to him, Crawford and his crew remained at their stations and fueled the ship. The ship developed a list to the starboard side but continued under her own power. While most carriers would have sunk with this kind of damage, the Saratoga remained afloat due to her initial battle cruiser design.