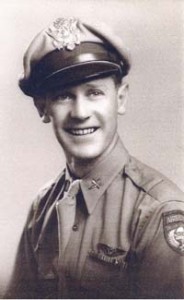 Delbert Bingham loved airplanes and desperately wanted to fly. When WWII broke out he volunteered to become a glider pilot, one of the most hazardous jobs in the military.

On September 17, 1944, Bingham took to the air in a fully loaded CG-4A Waco glider as part of Operation Market Garden, the largest airborne armada in history. This bold airborne invasion of Holland was a force of tens of thousands of paratroopers and glider soldiers. As Bingham and his buddies approached Nijmegen, Holland, he could see tug aircraft and gliders all around him taking hits. He watched a glider next to him spiral into the ground and explode.

Being towed at low level, he released his glider from the tug plane, and skidded roughly into a sugar beet patch. By nightfall Bingham and the 82nd Airborne glider soldiers around him had no idea how the battle was going. They kept careful watch until dawn as the sound of machine gun fire and tanks echoed through the darkness.

For ten days Bingham lived in foxholes while fighting alongside the infantrymen. Soon the Americans gained the upper hand and Bingham and the other glider pilots started their trek, under fire, back to Belgium. During the next several months, Bingham made numerous flights into France, Belgium, and the Netherlands delivering infantrymen and supplies. For his service Bingham was awarded the Air Medal, a Distinguished Unit Badge with two oak-leaf clusters, and several other awards.