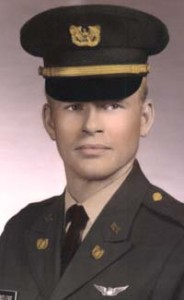 William Jesse “Bill” Rutledge was born April 3, 1947. Rutledge comes from a family with a long history in aviation and always knew he wanted to be a pilot. As a young man in the late 1960s facing an inevitable draft call, he requested to enter the warrant officer program so he could fly.

Rutledge entered the Army July 22, 1969 and completed helicopter flight training at Ft. Walters, Texas and Ft. Rucker, Alabama. By late 1969, Rutledge found himself in Vietnam assigned to Bravo Troop 1st Squadron, 9th Cavalry, 1st Air Cav Division–a unit he volunteered for because he heard that they were always in combat. Rutledge initially ferried troops into combat in Hueys before transitioning to flying Cobra attack helicopters.

Usually flying as part of a “hunter-killer” team, Rutledge logged 1,015 combat hours in Vietnam and Cambodia. On February 26, 1971, while on a mission to provide cover fire for U.S. troops who were ambushed by a regimental sized enemy force, Rutledge earned the Distinguished Flying Cross for “engaging the enemy with rocket and cannon fire with complete disregard for his own personal safety.” He is credited with saving many lives and his actions helped win the battle that day. In addition to the Distinguished Flying Cross, Rutledge was also awarded two Bronze Stars, an Air Medal, and the Army Commendation Medal, both with the “v” for valor device.

Rutledge still remembers a hard lesson he had drilled into his head watching many tracer rounds zip toward his cockpit window, “You only have three seconds to make any decision.” He lives by those words to this day.