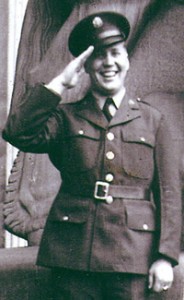 Climbing aboard a B-17 as the plane’s radioman and heading off for targets in France in 1942, Paul Galloway, born in Idaho and raised in Salt Lake City, felt a long way from home. He’d enlisted in the Army Air Corps shortly before America entered World War II. Since he’d been a civilian ham radio operator, the military assigned Paul to specialized courses in radio, the new radar technology, and gunnery.

He was assigned to the 305th Bomb Group initially based in Salt Lake City. In October 1942 the unit was sent to Scotland where its crews starting flying B-17s.

On Galloway’s seventh mission the bomber formation was attacked by German Focke-Wulf 190 fighters. Two planes were shot down, then the Germans came after Galloway’s plane. The pilot was trying to put on his life jacket when gunfire shattered the windshield. It wounded the copilot who was at the controls and also struck both wings. The big bomber rolled over and dropped sickeningly about 7,000 feet before the pilot could regain control. Galloway, who was at a gun station, was knocked unconscious momentarily. When he returned to his machinegun, he realized he’d been hit in his left eye. Yet he was still able to down a German fighter.

Although bleeding badly, Paul realized his help was needed elsewhere. He made his way nearly the length of the plane back where the rear gunner had been wounded. Paul relieved the injured gunner, then climbed into the cramped position and took over the twin .50 caliber machineguns in the plane’s vital defensive post.

The battered plane limped back to the first airfield in England the pilot could find. The damage was so great the bomber never flew again. At a hospital, surgeons removed Galloway’s left eye and treated him for a torn retina in his right eye.

He later returned to service training new flight crews in England and teaching radio and radar courses. He was next assigned to the Air Disarmament Command. This required trips into France to ferry back captured German plans and equipment. “We marked those planes very carefully,” Paul says, “to avoid being shot down.”

While at a dance in England, Paul met Emma Whitelaw, a Scot serving with the Women’s Air Force Auxiliary. His invitation to join him on the dance floor was met with Emma’s curt reply: “No, I don’t dance with Yanks.” In time, Paul must have charmed away her resolve. They eventually married, moved to Utah, and raised a family.