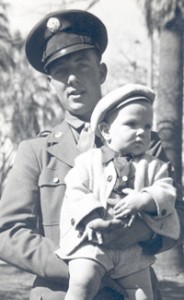 In the autumn of 1944 U.S. forces slowly but inexorably closed a pincers movement against the Japanese, one arm slamming across the Pacific Islands, the other swinging wide and up through the Philippines. On the island of Leyte, Private First Class Max Harding, a draftee from Provo, Utah, saw his first combat action. He was with Company B, 382nd Infantry Regiment, 96th Infantry Division.

One evening following a fierce battle, Harding was assigned to protect and care for casualties who could not be evacuated from the battle site until the following morning. Knowing the enemy’s ability in nighttime patrols, he cautioned the wounded men under his care: “Don’t moan or cry out.” Then he reassured them: “I will protect you and we’ll be OK.” And they were.

In April 1945, Harding landed with the 96th Division on the beaches of Okinawa where fanatical Japanese troops lay in wait in deeply fortified redoubts. It was the largest amphibious landing of the Pacific war. Okinawa was to be the key headquarters for the impending invasion of the Japanese homeland. Harding was serving as an artillery forward observer. With walkie-talkie in hand, he was in front of his own troops, picking out enemy strong points, then calling in and adjusting fire from artillery units as well as from aerial support overhead. Days later, after his platoon had suffered heavy casualties, Harding improvised a litter, or stretcher, to evacuate the casualties. Under intense enemy fire, he returned time and again to rescue his wounded platoon leader and other soldiers from the battlefield. For this action, Harding was awarded the Bronze Star for Heroism.

Heavy combat continued against the enemy defenders, who slowly retreated from successive lines of resistance. On May 13, Harding was severely wounded and evacuated to a hospital ship. He had so many shrapnel wounds, surgeons had to employ a new technique of tying off the muscles in his abdomen in order to reach and extract numerous pieces of metal. The successful surgery allowed him to remain the standing-tall gentleman he is today. Harding was awarded the Purple Heart for his wounds.

In the bloody, 82-day battle to invade and secure the strategically vital island that was only 340 miles from Japan, the 96th Division lost more than 7,000 men – killed, missing or wounded – the highest toll of any Army unit on Okinawa. Subsequently, the 96th was awarded a Presidential Unit Citation.