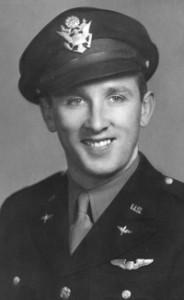 Stillman Harding was raised on a farm in Willard, Utah and graduated from Box Elder High School. He joined the 222nd Artillery of the National Guard in 1940. After Pearl Harbor, his unit first guarded a reservoir near Carlsbad, California. But after a Japanese submarine shelled a refueling dock at Santa Barbara, the 222nd set south of the city to protect the docks.

In 1942 the Army changed requirements for flight training and Stillman, wanting to fulfill a dream, successfully applied. Trained on B-17s and B-24s, he was assigned to the 464th Bomb Group of the 15th Air Force. Based in southern Italy, they flew missions into Germany, Romania, Austria and Southern France.

On a mission over Austria to bomb a factory producing German fighters, the bombers encountered heavy flak. A nearby burst penetrated the aircraft and left Lieutenant Harding without a thumb and with a severe leg wound. Crew members tried to unhook him from his oxygen supply, but he refused until the mission was complete. After successfully bombing the factory the B-24, now flying on two engines, managed to land at a British Air Base in central Italy and Harding was taken to a nearby American hospital.

Upon return to the U.S., Harding was sent to Bushnell Hospital in Brigham City, where his wife was a nurse. But she was not informed. One day, she was helping transfer patients from ambulances to the hospital. She opened the door of an ambulance – and there was her husband!!

Soon after, while Stillman was lying in bed, an entourage led by actress Madelaine Carroll swept in and awarded Harding a Purple Heart. A few weeks later he also received the Distinguished Flying Cross and an Air Medal. Harding spent 13 months in the hospital and was told he’d need to use a cane or crutches the rest of his life.

After the war Stillman Harding spent 30 years as an air traffic controller, another 16 as an editor for the LDS Church. He retired 20 years ago and now at age 90 is living on the family farm in Willard.