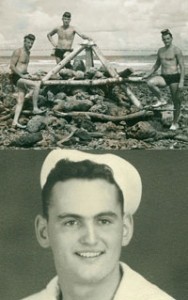 When he finished high school in Salt Lake City in 1942, Neil Holbrook found the Navy was the only service that would accept him. He was completely color-blind – and he couldn’t swim. Due to these deficits, Neil was placed in mandatory limited-duty status.

But he found he could volunteer for “extreme hazardous duty” in a prototype unit performing underwater demolition. His rigorous training included open-water swimming at night (he had learned fast), ocean swimming, diving, navigation, hand-to-hand combat (during which his leg was broken!), scouting, mapping, rubber-boat training, knife fighting, explosives, gunnery, and small boat operations. Since this was a unique unit and no one had previous experience, much of the training was devised on the spot.

Once qualified as a full-fledged “frogman,” Holbrook was assigned to the UDT Team 7. It became the Navy’s first commando unit to enter combat in the war during the invasions of the Pacific islands of Saipan and Tinian.

Holbrook and other team members swam into the surf while under fire from Japanese fortified positions, armed only with combat knives. They placed explosives on underwater devices that would obstruct U.S. landing craft, then detonated them to clear the invasion channels. Afterwards, the swimmers were retrieved by a boat in a high-speed pickup maneuver. The UDT team was also in the surf off Okinawa performing the same highly dangerous tasks.

Holbrook had a recon mission at Sendai, Japan, in preparation for a mainland invasion set for October 1945. But the war ended in August of ’45 with the dropping of two atomic bombs. Holbrook and his teammates completed 26 missions in all, at many different islands.

He was wounded at Okinawa and received the Purple Heart. Later, Holbrook was awarded two Bronze Stars for bravery and valor in the American invasions of Tinian and Okinawa.After the war, Holbrook came home, got married, and earned a law degree. Now age 84, he lives in Spanish Fork. He has reason to believe he is the only surviving member of the Navy’s original 12 “frogmen.”