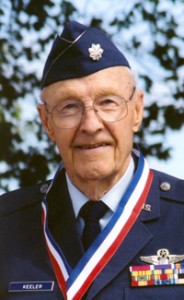 Grant Keeler, a native of Provo, Utah, joined the Army Air Corps in 1942 and began flight training in early 1943. After graduating, he was shipped to England and took over as pilot of a B-17 bomber in the 551st Squadron, 385th Bomb Group. His first mission was on July 4, 1944.

Most of Keeler’s missions sent him over Germany, bombing fuel refineries, railroad yards, and ball-bearing factories, the latter located in the famously well-defended city of Schweinfurt.

In October, ground fire struck his aircraft, hit Keeler in the leg, and knocked out an engine and the hydraulic system. The B-17 made an emergency landing in Holland and, having lost the brakes, the tail gunner’s parachute was deployed to help stop the plane.

In November, Keeler’s plane was again hit over Germany by anti-aircraft fire. An engine failed and two others were damaged, so Keeler decided to jettison the bombs and try to reach England. But the B-17 couldn’t make it and came down, this time near the Holland-Germany border.

Keeler, his copilot, bombardier and navigator were quickly captured by German troops. They were taken to an interrogation site and Harry Weismann, the navigator was put in a separate room. They heard sounds of a scuffle and then two shots. They learned later that Weismann had been executed, likely because of his Jewish heritage.

The crewmembers were next transported to Frankfurt, then imprisoned at Stalag Luft III. In January 1945, the POWs heard artillery fire from the east. Soon they were ordered to abandon the camp. They were marched for several days, ending at a railroad station where they were crammed into freight cars and taken to another prisoner camp at Moosburg, Germany.

For the next several months they lived in tents and food was scarce. On April 28, General George Patton’s troops captured the town. The next day the flamboyant general showed up at the camp’s gate. “It was fantastic,” Keeler says. “He brought with him several trucks with the best bread I’ve ever tasted.”

After his release, Keeler came home to Utah via Paris, Le Havre, England and New York. He stayed with the Air Force and participated in the Berlin Airlift in 1948.

He then joined the 36th Fighter Wing in Germany and flew the F-80, America’s first fighter jet. His continuing career included flying much more modern F102s and F-106s. In 1970-71 Keeler served in Vietnam as commander of a forward air controllers unit. He retired in 1971 as a lieutenant colonel.

Today he lives in Layton, Utah.