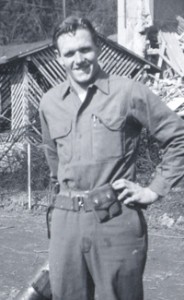 Byron Lemmon was a 19-year-old draftee when he was sent to Alabama for training with an anti-aircraft unit before taking a troopship voyage to North Africa. After several months there, his outfit moved on to Italy and was designated as the 99th Chemical Mortar Battalion. Lemmon received intensive training on the 4.2 mortar, the largest of its kind used for shorter-range bombardments.

Next, his unit was sent westward and Lemmon entered combat in November 1944 in southern France, with his battalion attached to the 100th Division. Then, in support of the U.S. Third Division, the mortarmen engaged the Germans in the Colmar Pocket campaign, where some of the fiercest fighting of the European Theater took place and in some of the coldest weather in two decades. The mortars were kept busy providing fire support for the advancing American infantry. Sometimes mortarmen were called to fight as infantry as well.

Lemmon earned a Bronze Star for heroism when, as the medal’s citation explains, he “refused to leave his gun even under an intense enemy barrage and continued to fire his weapon during a critical fire mission with complete disregard for his own safety.” Lemmon was first wounded when the Germans attacked the mortar positions. Although hit in the chest, Lemmon says “Fortunately, my injuries weren’t too severe because I had several layers of clothing on.” After three days of recovery, he returned to his unit to find that the Germans had secured a contested area. But the Americans rallied and finally drove the enemy back across the Rhine River. Afterward, Lemmon’s unit was awarded a Presidential Unit Citation for its efforts in support of the Third Infantry Division.

In April 1945 in southern Germany, a sniper’s bullet dropped Lemmon. He was put into an ambulance with other casualties and they all headed off for a hospital. But given the fluid nature of the war at that time, a hospital wasn’t always easy to find. In this case, it took 12 hours of bouncing around before locating medical help. Lemmon spent a month in recovery, but got back to his unit in May. Then they were sent home in anticipation of an offensive against the Japanese homeland. Two atomic bombs changed that, and allowed Lemmon’s unit to be deactivated.

Lemmon, who retired with the rank of major, continues to support and honor our military personnel today. He is executive director of ESGR – Employer Support of Guard & Reserves. His reflections on his wartime experience include this observation: “The camaraderie was just outstanding. No one knows that feeling unless you’ve been in combat. It’s a bonding you can’t get anywhere else.”