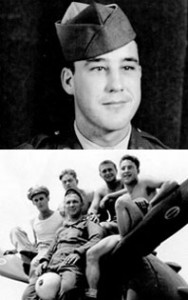 At the age of 10, Afton Pollock was tending flocks of sheep by himself, which, as the son of a sheepherder, was not unusual. After graduating from Bryce Valley High School in Tropic, Utah, war broke out and Pollock found he was draft-exempt – because sheepherding was considered a civilian occupation crucial to the war effort.

But Pollock was uneasy about being thought of as a draft dodger, so he appealed to his draft board to release him from his deferment. It did, and in 1943 he entered the Army Air Corps. After training, he was assigned as a tailgunner on a twin-engine B-25 bomber. Pollock was 23 – the oldest member of the crew. His unit was sent to India, in the China-Burma-India theater of operations. Then Pollock became an aerial photographer, assigned to take crucial intelligence photos that helped plan bombing raids and also aided in evaluating the accuracy of the bombardiers. He flew 73 bombing missions and at least that many more on reconnaissance flights over enemy territory.

In February 1945, Pollock’s plane was on a bombing mission to Mandalay, Burma, when an engine failed and they were still 300 miles from their base. There was no choice but to jump, so the crew parachuted into the jungle and were soon met by friendly Burmese tribesmen. After many days of walking through the steaming tropical forests, the crew was picked up by a rescue party. A month later he was back in the United States, at the end of his military career. He was awarded two Bronze Stars and two Air Medals.

After the war, Pollock became a schoolteacher, then a principal – and the circle was complete. He was back at Bryce Valley High School in Tropic, Utah his hometown.