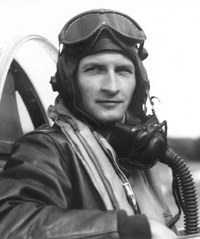 A native of Fairview, Utah, Alden Rigby completed flight school in December 1943. He graduated from training on the P-51, America’s hot new fighter plane, then served as an instructor for two months at Bartow, Florida before being assigned to the 352nd Fighter Group based at Bodney, England.

When he was assigned his own P-51D fighter, he named it “Eleen and Jerry” after his wife and baby daughter. On November 27, 1944, Rigby downed his first enemy fighter, an Me-109.

In January, he was one of 12 pilots who flew combat during the famous “Legend of Y-29 Mission,” during the “Battle of the Bulge”, in which he shot down two Me-109s and two FW-190s, which were Germany’s top fighters. Three of these four victories came after his gun-sight failed. Two of the enemy fighters were shot down while having a distinct advantage (on the tail) on two American pilots. This aerial feat qualified him as an Ace. This single battle has been published as “the most devastating air ground attack in the history of WW II.” It has also been featured on the History Channel several times. The score was 24-0, under perhaps the most difficult odds of any American encounter in WW II.

In September of 2000, the American Fighter Aces Association’s Aces Victory Confirmation Board awarded Rigby the fourth victory at Y-29. This gave him five air-to-air kills and six total victories. He had also destroyed a German JU-52 on a strafing run, which he recalls “burned really well as it was made out of wood”. Also destroyed were many trains and barges.

“In air-to-air combat you could defend yourself,” Rigby says, “but with the liquid cooled engine, the P-51 in ground strafing was murderous.”

He flew 76 combat missions, with a total of 272 combat hours. He received the Silver Star, seven Air Medals, the Presidential Citation, French Croix de Guerre and the Distinguished Unit Citation.

Rigby served three years active duty in the Korean War with the 33rd Air Division of the Air Defense Command. He also had 25 years in the Utah Air National Guard and paired 25 years with the FAA.

He’s logged more than 150 flight hours in the Navy/Marine F4U Corsair, and also flew the F8F Bearcat, the FJ-1 Fury, and many other Navy and Air Force combat aircraft.

He retired in 1979 with the rank of major. Alden Rigby was inducted into the Utah Aviation Hall of Fame in May 2007.