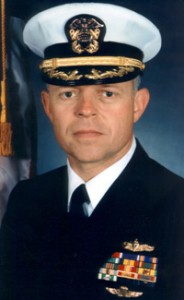 In June 1967, Jeffrey Thompson entered the Navy as an Ensign from the University of Washington’s Naval ROTC program. He was assigned as a gun director officer on the USS Epperson, a destroyer out of Pearl Harbor, Hawaii. His ship spent seven months off the coasts of North and South Vietnam. The Epperson fired almost 17,000 rounds, a record for that class of ship. Once, while off the coast of North Vietnam, the Epperson was engaged by enemy guns and reported sunk. But the destroyer had actually silenced the guns, allowing U.S. planes to use the area for attacks. The ship’s personnel won the Combat Action Ribbon for hostile action.

In 1969, Thompson volunteered to return to Vietnam and was assigned to a Marine unit just south of the Demilitarized Zone as a forward observer for naval gunfire, artillery and air strikes. He was later attached to the Army’s 1st Brigade, 5th Infantry Division, and directed fire missions from the air and ground. In December Thompson was wounded during an attack on a remote outpost, and earned the Purple Heart. He was also awarded the Bronze Star for this mission conducted in hostile areas.

Thompson sometimes rode as a “back seat” observer in an Army O-1 Birddog, an unarmed, two-seat, single-engine spotter plane. They often flew very low acting as eyes for the ground troops. More than half the time they encountered enemy ground fire. For these missions, Thompson earned four Air Medals. During his final two months, he was the Navy liaison at the Army’s I Corps Headquarters in Da Nang. He was responsible for all naval gunfire in the corps area that covered five provinces. His second Bronze Star was awarded for this duty.

Thompson returned to the U.S. in August 1970 and joined the Navy Reserve. He was attached to various intelligence units throughout the nation. During 1987-90 he was commanding officer of two intelligence units as well as area commander for five western states. His service was reflected in two Commendation Medals. He retired in 1993 as a Captain.