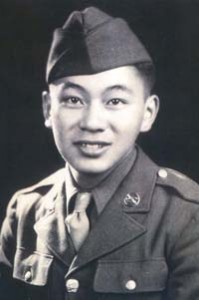 Born in California to Japanese parents, Nelson Akagi learned as a teenager what it meant to be categorized as an “alien” in his own country after World War II broke out. When the U.S. government threatened confiscation of their home, the Akagi family sold their farmland at a loss and moved to Idaho to find work.

After having to endure taunts and humiliation – even from schoolmates – Nelson volunteered for the Army. He wanted to prove he was loyal to the USA. He was sent to Mississippi to train with the 442nd Regimental Combat Team, comprised of volunteers from Hawaii and from the Japanese-American internment camps. After a year’s training, Akagi’s unit was sent to Italy where it fought from June until September 1944. The 442nd was then sent to France where it went into action in the Vosges Mountains. It was there that Akagi’s combat team in a five-day battle rescued the so-called “lost battalion” – 1st Battalion, 41st Infantry Regiment, 36th Division – which had been surrounded and in danger of being wiped out. But casualties taken in the operation so depleted the 442nd’s ranks it was sent to the Maritime Alps to “regain our strength,” Akagi recalls.

In the spring of 1945, the 442nd returned to combat in Italy, but Akagi’s 522nd Artillery Regiment remained in France and joined the push into Germany. Forward observers and forward echelon groups from the 522nd were among the first Allied troops to release prisoners from the notorious Dachau concentration camp. Akagi was a changed man when he returned from the war, less resentful about the way he’d been treated in his own country. When a waitress in St. Louis struck up a conversation with him, and never once asked his nationality, it was a moment that “helped melt my bitterness,” says Akagi.

Akagi earned five decorations for his service, but had never received them. When his family found out, they secretly set up a formal presentation in 2005 in Salt Lake City with General Peter Cook of the Utah Army Reserve, and the humble fighting man finally gained the acknowledgement he had earned. He received one medal for fighting in four campaigns, a good conduct medal for WWII, an Army of Occupation medal, and a fifth for fighting in the American Theatre of Operation. The 442nd RCT became the most decorated unit in U.S. military history for its size and length of service. It was nicknamed the Purple Heart Battalion due to its heavy casualty rate, and received seven Presidential Unit Citations (five in one month). Its members reportedly earned some 18,000 awards, including 21 Medals of Honor, the nation’s highest award. Akagi is a resident of Salt Lake City.