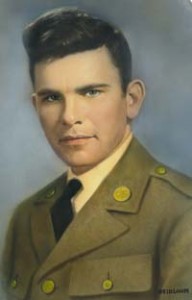 It must have seemed to Charles Cooke that the Army was so eager to get him into the war, it wasn’t even taking time to train him. Cooke, a native of Mississippi, had moved to Utah as part of the national Civilian Conservation Corps. He had scarcely been drafted and sworn in to the Army when he found himself in England without benefit of basic training.

After two months, he was sent to North Africa for his first taste of combat. He was a machine gunner with the 38th Regiment, 2nd Infantry Division and served under General Patton. By that time the Germans had perfected the tactic of using mobile guns (presumably the famed 88 cannon, noted for its accuracy). They would fire on the Americans, then immediately displace before the Yanks could get zeroed in. The Germans took a high toll in GI casualties. In addition, Cooke recalls, the North African wind blew sand everywhere – in eyes, mouths, hair, weapons. Conditions were uncomfortable and most of the action took place at night when it was cooler.

After three months, Cooke was sent back to England and awaited orders for D-Day. He landed on Utah Beach on D+2 and was struck by the amount of dead soldiers still around, as well as the well-constructed German pillboxes that had to be destroyed by invading troops so they could get off the beaches.

Cooke and a buddy shared a foxhole at Normandy. When it began to rain, they grabbed a piece of steel that had been blown off the side of a tank to cover their hole. During the night a mortar shell landed smack on top. Underneath, Cooke and his buddy were unharmed. But the ringing from the explosion resulted in permanent hearing damage in Cooke’s later life.

From Normandy, Cooke saw action that took him to Paris through Luxembourg into Belgium and finally, Germany. He also went to Czechoslovakia and waited for the Red Army to arrive in Prague. Then, it was back to France where he embarked for the Pacific.

Shortly after, the first atomic bomb fell on Japan. Then the second bomb.

Cooke’s ship returned to France briefly and continued on to Germany. Cooke was there for several months before returning home. He was discharged at Fort Douglas in November 1946. Cooke now resides in Salt Lake City.