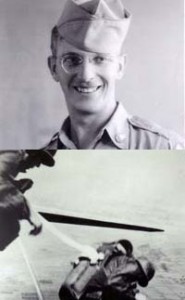 Dinkelman, a native of Granger, Utah, tried to enlist into the U.S. Navy in 1942 but was rejected because of poor eyesight. But the U.S. Army eagerly took him. He immediately volunteered for Tank Corps judging that inside a steel Sherman tank would be the safest place on the battlefield.

Dinkelman’s first day of combat came on D-Day, June 6, 1944 in Normandy, France. His howitzer-equipped support tank landed under intense fire onto Omaha Beach just behind the famed “Big Red One” 1st Infantry Division. His unit, the 741st Tank Battalion, suffered terribly losing 34 tanks during the first hour. Over the next two weeks Dinkelman and his fellow tankers fought tenaciously on into the deadly hedgerow country of Normandy. By the end of June the 741st t Tank Battalion lost 46 tanks to mines, enemy tanks, anti-tank cannon, rockets and artillery.

Through July and August the intense fighting continued. Dinkelman’s unit destroyed pillboxes, machines gun nests, artillery, dozens of enemy tanks and killed or captured hundreds of German soldiers. A well-deserved break finally came on August 28, 1944 as his entire tank battalion paraded through liberated Paris. They were overwhelmed by tens of thousands of cheering French. Eager, beautiful girls passionately hugged and kissed them. Dinkelman remembers, “It was a young, teenage soldier’s dream come true.”

The 741st Tankers plunged back into combat fighting up through Belgium and the German border. But at the town of Elsenborn, on December 17, 1944, they found themselves suddenly surrounded. With some 500,000 troops and 1,000 tanks the Germans had launched the Battle of the Bulge. Dinkelman’s unit engaged huge Panther tanks at point-blank range. Firing was so rapid their Sherman’s cannon barrel glowed red. Inside their turret, Dinlkelman and his fellow crew bled from their ears and noses traumatized by intense breach-gas pressure. By the end of the desperate weeks of fighting his armor unit had destroyed 28 German tanks and captured many hundreds of enemy foot soldiers. Dinkelman and his tank battalion unit kept on fighting to cross the Rhine at Remagen Bridge, liberate death camps and help force the surrender of Germany.

Two decades later he would also volunteer for two tours of combat duty in Vietnam. Promoted to Warrant Officer, he skippered a shallow-draft supply boat up the jungle rivers constantly taking enemy fire.