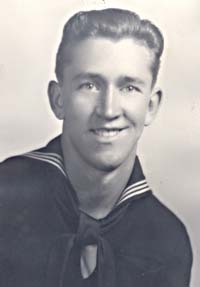 Hammill, a native of Salt Lake City, enlisted into the U.S. Navy in January, 1942, at the age of 17. After basic training and sonar school he was assigned to the crew of the APD-17 U.S.S. Crosby. Converted into a swift, amphibious attack vessel designed to deliver shock troops into battle, the Crosby was an old World War I destroyer brought out of mothballs. Painted in garish green-splotched camouflage, it joined 4 other ships of its class to create an amphibious warfare task force called TRANSDIV 22, “The Green Dragons.”

It was during operations off of Bouganville Island on November 17, 1943 that Hammill survived through one of his most memorable days of combat. Hammill was manning his battle-stations post at an anti-aircraft gun on the bridge. The Crosby was under a viscous strafing and dive-bombing by two Japanese aircraft. Witnesses report that Hammill fired with deadly accuracy at a low-flying bomber that was starting a Kamikazi attack on his vessel. Sonarman Hammill opened up his 20mm gun emptying a full magazine into the enemy plane. His shells tore apart the enemy’s cockpit causing the aircraft to veer up radically, barely missing the ship’s bridge before plunging into the sea.

Hammill sailed and fought on his ship for 23 consecutive months. At war’s end, he came home to Salt Lake City and earned a Law Degree from the University of Utah.