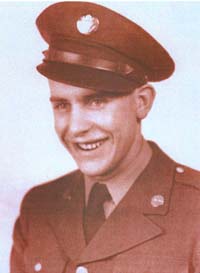 Contrary to most young men, Raymond Howarth fought to get into the Army. He’d been rejected by all services because of a heart murmur. But he stubbornly protested his II-B classification until it was changed to I-A, and he was immediately ordered by letter to report for duty. It was August 1943. After infantry training, he joined the 60mm mortar section of a rifle company in the 100th Infantry Division.

After landing in France, Howarth’s unit went into action near St. Remy in the Vosge Mountains. While under fire from German artillery and mortars, Howarth saw a good friend get killed. “I think it was the first and last time I cried for one of my buddies,” he says. “I was so angry.”

When his squad leader was wounded, Howarth was named to replace him. “Just like that,” he says, “I made sergeant.” His first job was to direct the tricky and dangerous clearing of booby traps and mines in the area that became known as Booby Trap Hill. During the next two months, there was continual slogging, bloody fighting in the snow and mud of the high Vosges. Howarth’s battalion received a Unit Citation for battling up steep slopes for five hours under heavy fire, and wresting the high ground from determined German defenders.

Howarth often wondered why he was spared when others weren’t. He wrote in his personal journal: “It is not possible to describe the closeness that is forged with the bonds of combat and the constant fear and concern for their safety. And when they die on you, the loss is so terrible because it is as if a part of you has been torn away, and it is even worse, because you are not even allowed to stop and grieve.” On January 1, Howarth was wounded and thrown to the ground next to a dying friend. After great attempts to keep his friend warm and comfortable, he was urged to leave. “It was like leaving a part of me behind,” he says. He sought shelter in a nearby farmhouse, but was captured by the Germans and taken to Stalag XIIA at Heppenheim, Germany. Only severely wounded Americans were brought to Heppenheim, which was called a prison “hospital,” but according to Howarth, “There was only one sadistic doctor, no nurses, no medicine and no clean bandages.” The camp was liberated by the 45th Division in March and Howarth returned to the U.S. in June. He was hospitalized until his discharge in November. He received a Unit Citation, a Bronze Star, a Purple Heart and a Combat Infantry Badge.

Howarth could not talk about his experiences with anyone but his wife for more than 50 years. He apologized to his six children for shutting them out, and eventually wrote a 45-page book and a CD that told his wartime story and, according to Howarth, “found some peace.”