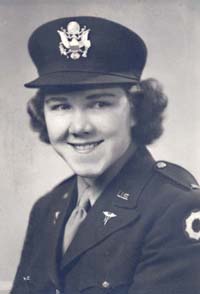 Young 18-year-old Ora Mae Sorensen, a native of Manti, Utah, dreamed of exotic travel and high adventure. Delicate, smart, and pretty, she had never seen the ocean, flown in an airplane or ridden in a train. Graduating from high school in the Spring of 1940, the small-town girl eagerly made big plans to make those dreams come true. Determined to become a far-traveling airline stewardess, Ora Mae immediately enrolled into medical nursing, for in 1940 being a certified RN was a necessary prerequisite for the high-altitude profession. She was in her first semester at a Salt Lake City hospital when the news of the attack on Pearl Harbor crackled over the radio. She instantly altered her plans and volunteered to join the U.S. Army to tend the wounded.

With three years of intensive training, nursing degree in hand, Ora Mae was commissioned as a Second Lieutenant in September, 1944. Sent to Fort Lewis, Washington, she fell in love with a handsome, young officer she met during a church service. They married just before she shipped out to the South Pacific and he to the China-Burma-India Theater. Ora Mae boarded a wartime-converted ocean liner, the S.S. Admiral Capps in March of 1945. Crowded with 5,500 troops, the camouflaged vessel steamed past Hawaii and Einewetok, then took on supplies on at the tiny land speck of Ulithi Atoll. The Admiral Capps then joined a massive convoy of warships, zig-zagging to thwart Japanese submarines. The convoy then was hit by a massive typhoon, sinking several ships. When the skies cleared they finally came into sight of Okinawa.

All on board knew the battle for the big Japanese Island was going badly. Generals and Admirals had planned to overwhelm it in just a few days. But fanatical Japanese defenders were still holding out after two months. Tens of thousands of sailors, Marines and army soldiers had been killed or wounded. Ora Mae’s skills as a nurse were critically needed. They steamed into Okinawa’s harbor at night to avoid the waves of deadly Kamikazi aircraft that were still threatening the U.S. fleet. Huge flashes of artillery lit up the sky and thundered. Clad in fatigues, combat boots and helmet, she clambered down a cargo net and was shuttled ashore in a landing craft.

On the beach, at a tent hospital, word came down asking for nurses to help out just behind the front line. Ora Mae along with three other nurses instantly volunteered. They were assigned a bodyguard of armed Marines, then hopped into a truck. After churning through miles of hub-high mud, they arrived at the 27th Field Hospital. It was collection of tents set-up just behind the forward lines to aid the critically wounded. Nearby artillery and rifle fire echoed night and day. Japanese snipers were all around. Ora Mae and her sister nurses worked valiantly, 12-hour shifts, week after week. The wounded poured in by the hundreds. But Ora Mae felt it was the most rewarding moment of her life. Even after the battle ended she carried on resolutely tending the thousands of wounded waiting to be evacuated.

Finally on August 15, 1945, the sky exploded with star-shells and tracers. Every ship in Okinawa harbor was madly firing off pyrotechnics. The war had ended. After a short stint in occupied Japan she winged her way home on across the Pacific on an army transport plane. It was in the middle of the night when the finally approached San Francisco. As she looked down through a small window she saw spelled out in huge lights “WELCOME HOME….WELL DONE!” She cried.

Ora Mae came home to Utah and made a beautiful life with her husband. She had ten children, 52 grandchildren and 53 great-grandchildren. She traveled the world many times seeing exotic lands and peoples. And to this day she’s proud she can still fit into her Army uniform.