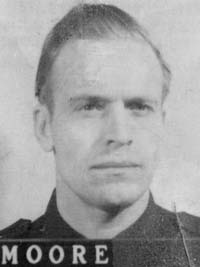 John Moore had to lose 20 pounds in two months to get into the Army Air Corps Reserve in February 1942. And he did it. As a result, he became a private earning $21 a month. He then became an aviation cadet, but flunked the Single Engine course. So he was sent to Navigation and Bombardier School. He graduated, got a lieutenant’s commission, and went to New Mexico for B-29 training as part of a unit.

In April 1944 his unit got brand-new B-24 Liberator bombers and flew them to England. In May, Moore’s crew, now part of the 492nd Bombardment Group, began flying bombing missions over Europe. The 492nd flew 60 missions in 89 days, and acquired the nickname “Hard Luck 492nd” because it lost more men and aircraft in a shorter time than any other such group in Air Force history.

In an in-flight saga of bravery, Moore had to find a way to release six 100-pound bombs hung up in the plane’s bomb bay. Carrying a 10-minute supply of oxygen, Moore eased out over the armed bombs on a catwalk with no safety line and the B-24 flying at 28,000 feet. He wrestled the bombs free one at a time, and made it back just as his oxygen ran out. For that feat of heroism, Moore was awarded the Distinguished Flying Cross – the same medal also given to Charles Lindberg, Richard E. Byrd and Amelia Earhart.

At that time, a crew had to fly 30 missions in order to return home. Moore had blown an eardrum on his first combat flight and was four missions behind. On the day his crew was leaving, “I was run over by a bicycle and spent the next 2½ months at the hospital,” Moore relates. When he returned to duty the minimum of combat missions was 35.

However, he was assigned to the clandestine 801 Composite Group that flew low-level missions to drop supplies to Resistance fighters in France or to parachute Allied spies behind enemy lines. Operation Carpetbagger was devised by the Office of Strategic Services, forerunner of the CIA. “We flew at night, at 500 feet for supply drops, 600 feet when dropping agents,” says Moore. ”You wanted to stay as close to the ground as you could without hitting a tree.” The public never heard about the Carpetbaggers until 40 years later. Moore made his last WWII flight in March 1945. He was in refresher training on B-29s when Japan surrendered.

When the Korean War erupted, Moore was called up. He flew 25 missions – all at night – in B-29s over North Korea. “In daylight, the MIGs (Russian-built jets) would have cut us to pieces,” Moore explains. In addition to his Distinguished Flying Cross, Moore was awarded five Air Medals, three European Campaign Medals, and two Korea Campaign Medals.

A native Georgian, Moore now lives in Salt Lake City where he spent 26 years with the Postal Service.