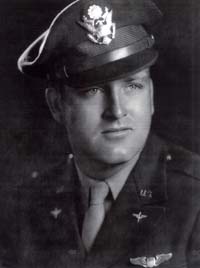 Flying had always been Jack Schade’s dream, so when he finished high school in 1939 he talked to an Army recruiter and signed up for a two-year hitch. On September 1, 1939 Schade sailed to the Panama Canal. He was assigned as an apprentice mechanic for B-18 and A-17 aircraft.

When Pearl Harbor was attacked in December 1941, all ranks were frozen in place. The Panama Canal was regarded as a likely target for the Japanese, and Schade’s unit started flying patrols and searching for submarines. Schade became a “Jack of all trades.” His duties included aerial gunner, radar operator, aerial photographer, parachute rigger, and flight crew chief. He was also accepted into the Aviation Cadet program and began flight training.

After getting his pilot’s wings Schade was assigned to the B-29s – the very heavy bombers. He trained with 10 other men as a crew, and they were assigned to the 458th Bomb Squadron, 380th Bomb Group and were shipped to Guam. Jack and his crew flew 26 missions over the Japanese homeland, a 3,000-mile flight that took about 15 hours. Schade’s B-29 twice made emergency landings on Iwo Jima, the battered but strategic island that had been taken by U.S. Marines at a very high cost. On one mission, Schade’s bomber lost seven feet of its horizontal stabilizer when hit by antiaircraft flak, but still made it safely back to Guam. On another mission, the bombs on Schade’s plane wouldn’t release and the bomb bay doors wouldn’t close. Schade and his navigator climbed into the bomb bay, without parachutes or little foot room. They carefully wiggled each armed bomb, then returned to the cockpit without knowing if they’d solved the problem. Happily, the bombs did drop, the doors did close, and the bomber returned without further incident.

Schade’s last mission was the famous “Show of Force” as the surrender documents were signed on the deck of the battleship Missouri in Tokyo Bay. About 3,500 planes, including 400 B-29s, thundered overhead for three hours. Their meaning was quite clear.

Schade came home from the war in November 1945. He later had a career as a flight captain for Frontier Airlines. Schade lives in Salt Lake City.