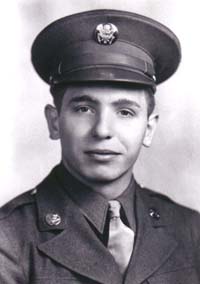 Luman Slagle went into the Army right after Christmas in 1942. He was trained as an artilleryman. He went to North Africa, landed in Algiers, and was assigned to the 60th Artillery of the 9th Infantry Division. His outfit first went to Sicily but saw no action. Next they went to England to train for the Normandy invasion. Cpl. Slagle was given the duties of a radio operator on an artillery forward observation team for the rest of the war.

Slagle landed on the Normandy beach on D+2. It was his first combat experience but “surprisingly enough, I was never afraid,” he says. “Some people are and some people aren’t.” It was no boast: “It’s just the way I was.” Slagle and his team would move ahead of the artillery battery until they could see an enemy target. The team leader gave Slagle firing information and he would radio it back to the fire control officer. The FO team would see where the battery’s round were exploding and adjust fire as necessary. It was dangerous work. When the Germans located an FO position, they’d attack, forcing the Americans to fight them off while still calling in firing instructions. One night the team was bedded down in a pillbox when the Germans counter attacked. Slagle gathered together a four man team who went out and fought off the enemy. A few days later Slagle was awarded the Silver Star.

When the Americans reached French villages and towns, they were greeted with flowers and cheers. “The Germans were probably there a week before,” Slagle says wryly, “and were probably greeted the same way.”

The unit crossed the Rhine River on the Remagen Bridge that the 9th Infantry captured before the Germans could blow it up. It was the only bridge over the Rhine still standing intact. Slagle’s outfit followed a seemingly endless routine: dig in, set up the guns, move out. “We had a large turnover. People that you worked with and loved might get killed the next day,” Slagle says. “They (Germans) were firing at us and we were firing at them.” The winter of 1944 was one of the coldest ever recorded, and Slagle’s unit spent the whole time in the Heurtgen Forest. “It calmed down during the winter,” says Slagle. Mostly, they just tried to keep from freezing.

Slagle was offered a battlefield commission because he could do everything well, but he declined. He didn’t want to leave his buddies. The war in Europe ended in May 1945. Slagle was on a ship headed for Japan when the Pacific war ended. In addition to the Silver Star Slagle earned Campaign Ribbons for Africa, Sicily and Europe and a Good Conduct Ribbon.