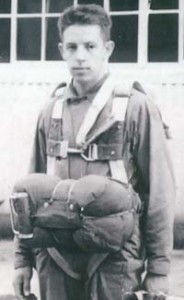 Stimpson, a native of Riverdale, Utah, was drafted in the Army in February of 1942. Attracted by the hazardous duty bonus of $50 per month, he quickly volunteered for the exotic, new parachute corps. He was assigned to the newly formed “B” Company, 1st Battalion, 504th Parachute Regiment of the 82nd Airborne “All American” Division.

His first fight with the enemy came July 11, 1943. Along with the rest of the 504th Regiment , he jumped into the nighttime skies over Gela, Sicily. Because of a tragic mix-up, the huge U.S Navy amphibious invasion force below mistakenly raked the paratroopers above with deadly anti-aircraft. Dozens of U.S. transport planes were shot down. Hundreds of Stimpson’s fellow G.I.s were killed and wounded. And after finally making their combat jump, Stimpson’s regiment then fought off German Tiger tanks sent to wipe them out.

In September, Stimpson would parachute again into the combat attacking Altavilla, Italy during the Allied invasion of Salerno. The 504th Regiment fought on into the ancient mountains and valleys of central Italy until mid-December. His battalion suffered greatly from not only enemy artillery and infantry attacks, but from sleet, mud and trench foot.

On January 21st, 1944, he and his fellow paratroopers invaded Anzio, Italy. But this time they churned ashore via seaborne landing craft. Thrown into the battle lines as standard foot-infantry, “B” Company endured weeks of nightmarish artillery bombardment beyond human endurance for even the toughest G.I.s. Sergeant Stimpson witnessed dozens of his fellow paratroopers mentally crack-up. By the time “B” Company was withdrawn, only 13 men of the original roster were fit for duty. All the rest had been killed, wounded or psychologically devastated. As it built back up to strength with new replacements and re-equipped, Stimpson’s Regiment was held in reserve during the June 6, 1944, invasion of Normandy.

But on September 17, 1944, the 504th jumped into combat once again into Nijmegen, Holland. When the battle was over Stimpson found himself the only original member of the 120 men of “B” Company to have survived unscathed. For actions at the Anzio Beachhead, Sergeant Stimpson was awarded the Bronze Star.