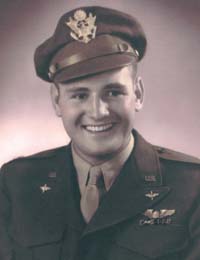 White was born in Salt Lake City, grew up in Los Angeles, and attended two years of college at Utah State University before enlisting into the Army Air Force in September, 1942. Possessing two years of pilot training as a civilian he was quickly selected to become a B-26 Marauder bomber pilot.

The B-26 had a lethal track record with the pilots training in it stateside. White witnessed the death of dozens of inexperienced pilots trying to master the aircraft. So bad was the bomber’s reputation it quickly became known as “The Widow Maker” and “The Flying Prostitute,” because its stubby wingspan seemed to give it “no visible means of support.” But White found the high performance aircraft easy to fly. He excelled in training and was promoted to full pilot before heading overseas.

His most hazardous mission was the morning of December 23, 1944, during the infamous Battle of the Bulge. The heavy winter weather had finally cleared up to allow the bombing of German ground forces surrounding beleaguered American G.Is at Bastogne, Belgium. White’s 397th Bomb Group was quickly put in the air to hit the enemy hard. Their target was a bridge near the town of Eller.

But U.S. fighters scheduled to escort them never showed up. White and his bomb group flew on to their objective despite their lack of protection. There they were met with intense ground fire that shot three of their B-26s out of the sky. They pressed onwards, dropped their bombs and severed the vital bridge. Just after the bomb run the formation was jumped by a swarm of 25 enemy fighters. They ripped into the B-26s destroying seven more. White’s bomber was riddled with bullet holes. When the enemy fighters finally departed, only five of the medium bombers were undamaged. For their bravery in facing the enemy and carrying out their mission, White’s 397th Bomb Group was awarded the Distinguished Unit Citation.

Captain White ended the war credited with 66 bomber missions. For his heroism in combat he was awarded the Air Medal 12 times.