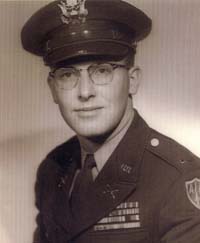 Clark enlisted in the Navy at age 17. After training he was assigned to the destroyer USS Rowan. His ship was to be part of an armada being formed in 1945 to support the invasion of Japan. En route to the Pacific, the Rowan put in at Pearl Harbor where the devastation wrought by the surprise Japanese attack in 1941 was still evident. The Rowan had continued to the Pacific war zone when the atomic bombs were dropped on Japan, resulting in its surrender.

Returning home to Utah, Clark entered the Utah State Agricultural College (later to become Utah State University) and earned a second lieutenant’s commission through the ROTC program. After the Korean War had broken out in 1950, he was assigned in 1951 to Battery A, 38th Field Artillery Battalion, 2nd Infantry Division as a forward observer. During an assault on a North Korean-held hill, Clark moved to the most forward position in order to direct artillery fire more accurately. He remained in that position despite continuous hostile fire. When he was no longer needed as an observer, he voluntarily led squads and platoons in the attack when their leaders were wounded and evacuated. He was awarded the Silver Star.

In 1952, Clark was flying as an observer over enemy territory in North Korea when the light plane was hit by antiaircraft fire. About six feet of one wing was shot away. Advised to parachute to safety, Clark realized the pilot could neither bail out nor land the plane by himself. So Clark helped the pilot control the plane – it took full left stick and rudder to keep it level – while they flew over mountainous terrain and made an emergency landing inside friendly lines. He was awarded the Distinguished Flying Cross.