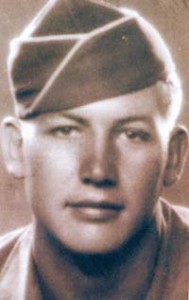 Day entered the Army in 1943 and trained as a sniper rifleman. He shipped out to North Africa for training and went into combat at Salerno in the invasion of southern Italy. He was wounded three different times during the heavy fighting – including some hand-to-hand combat – each time being sent back to his unit after receiving medical care.

In August 1944 his unit, the 143rd Infantry Regiment, 36th Division, landed in southern France. Day was in continuous action all through France and was wounded again. He was once reported “missing in action” after being captured by the Germans for a short while, and escaping. Returning to his unit, Day fought to the border of Germany. In January 1945 he suffered his fifth, and nearly fatal, wound – gunshots in the head. For several days he was left for dead on the battlefield and lay unconscious until he was discovered by soldiers recovering the fallen. Once in the hands of skilled surgeons, he underwent three operations before they could extract the bullets that had penetrated his skull. A doctor came in one day and placed five bullets in Day’s hand. “I took them out of your head,” he said.The resulting physical damage was such that Day had to learn to talk and walk once more. He was sent back to the United States for further medical care from April until November 1945. Physical problems continued to plague him throughout much of his life, although the seizures he suffered were controlled with medication.

In his hometown of Bountiful, where Day was a school crossing guard for nearly 40 years, schoolchildren, friends and city officials raised money for a flagpole, their way of saying thanks for his service. Elbert was also a member of the Bountiful Police Reserve for 20 years. His remarkable only son Terry was killed in Vietnam. Elbert has always been a medical miracle man.