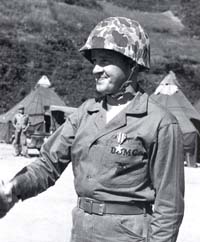 Epperson, a native of Salt Lake City, joined the Marines in 1943. He missed combat in World War II and was later dispatched to China for military assistance duty. He learned to like the Chinese, but within five years he was in a shooting war with them.

Epperson was discharged from service in 1946. When the Korean War broke out in June 1950, he was recalled to active duty in August as a first lieutenant. By September Epperson had landed with the lst Marine Division at Inchon, South Korea. It was the spearhead of General MacArthur’s famous pincer movement to avert disaster after the United Nations’ forces had been pinned by the invading North Koreans with their backs to the sea at the southern tip of the country near Pusan. To escape the trap, the North Koreans hastened back across the 38th Parallel.

By November, Epperson was deep inside bitter-cold North Korea. The audacious U.N. thrust to conclusively defeat the North Koreans ended abruptly, however, with an onslaught of thousands of Chinese who entered the war, surprising, encircling and threatening disaster for the American and allied forces. But Epperson survived the ordeal that included a fighting 45-mile foot march to eventual safety at the port of Hungnam. The breakout by Marine and Army units stands as an epic in military history.

In the May 1951 the Marines were fighting in central Korea. An outpost had been overrun which gave the Chinese an advantage of looking down at the U.S. positions. So Epperson “got some guys together,” as he tells it, and took back the outpost, killing some 38 Chinese in the action. For his courage and leadership, he was awarded the Silver Star.

Epperson ended his military service in 1958. He spent 22 years with Sears Roebuck in merchandising, and retired in 1980. He also worked as a factory rep to JC Penney. He makes his home in Murray, Utah.