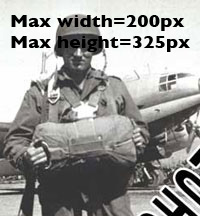 Flying a B-17 bomber was young Farnworth’s aspiration before he was old enough to enlist. But soon as he turned 18, he applied for aviation cadet training and was accepted. He received his wings and lieutenant’s commission in February 1944.

He was assigned to the 547th Squadron of the 384th Bomb Group flying out of England. On his first mission, flying as a copilot to gain experience, he saw a B-17 go down, a sobering sight. By the time his seventh mission came up, he hoped he wouldn’t have to fly: it was scheduled on his 20th birthday. But there was no time off for celebrations.

On his 24th mission, his bombardier said over the intercom that the Germans must be using a new kind of flak that exploded in big, orange bursts. Pretty soon, he made another announcement: it wasn’t flak at all. It was a B-17 blowing up. Sometimes, attacking German fighters would come in so close that Farnsworth could see the pilot’s faces. His plane was severely damaged on many occasions. The new aircraft was damaged so badly that rather than making it flyable again, they used the new plane for replacement parts. And, several times he was late getting back to home base and was reported missing.

Farnsworth and his crew flew 36 bombing missions, all of them over Germany. On many of the missions there were more than 1,000 bombers in the air along with as many as 720 fighter escorts.

After World War II, Farnsworth was in the Reserves from late 1945 until early 1948 and was stationed at Nellis Air Force Base when the Korean War started in 1950. He was recalled to an Air Weather Service unit assigned to Taegu and then Seoul. Most his time was spent at the headquarters of General Matthew Ridgway, commander of the U.N. forces. He returned home in April 1952.