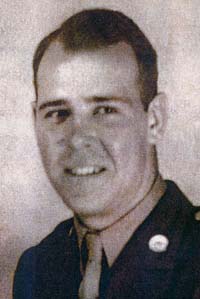 Faulkner was drafted into the Army in 1943. He volunteered in January 1942, but his high school basketball coach convinced his mother not to sign for the seventeen-year-old, so he earned an extra year of basketball and football. Once drafted, he was sent to the 97th Division at Camp Swift, Texas.

Faulkner and his Division landed in France; and they moved on up to Germany and into Czechoslovakia, where the war ended on May 7th, 1945. The last shot was fired in combat in WWII by Domenic Mozzetta from Faulkner’s squad. Faulkner was in charge of the last shot in a successful effort to rescue their badly wounded platoon sergeant.

Faulkner earned his Silver Star during heavy fighting in the Ruhr Pocket. During one operation, the Germans had his battalion pinned down on the south side of the Ruhr River. Army intelligence told them that the bridge to the north side was mined on all four corners. Faulkner cut the wires to the bombs on the south side, moved on the upstream side under cloud cover with a rubber dingy. He cut the wires on the upstream side; and while he was moving to the other side, he was wounded by machine-gun fire. He had trouble cutting the last bomb leads, because of the awkward position. He had to hold on with his left hand and swing himself in to catch the last wires with the wire cutters. He made it back without further problems.

Faulkner earned the Soldier’s Medal for rescuing a mother and her child from a stranded car in a flooded river on the flank of Ft. Leonard Wood, Missouri.

He earned the Bronze Star for reconnoitering venture into enemy territory. Even though it was a dark night, he accomplished his task. However, the Germans found him out, and he escaped on a dead run, bringing back valuable information.

The Purple Heart was for wounds received in combat. After V-E Day, Faulkner’s division was sent to the South Pacific to prepare for the invasion of Japan. Just about a week before they were to launch the invasion, the Japanese surrendered. Faulkner, along with 1st Lieutenant Gilbert Sharp from Orem, Utah, served as Assistant Prefect, in Japan, until he was sent home for discharge.

After college and several jobs, Faulkner was drawn to the LDS faith, and he joined the church in September 1966. He has taught at Brigham Young University, Utah Valley State College, and the Salt Lake Community College.