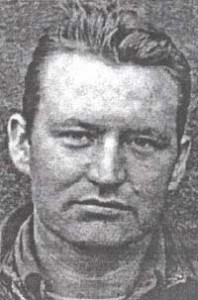 Hale got a pilot’s license after completing ROTC training at the University of Wyoming. He had a brief term of service in the Marines before being recruited as an Army aviation cadet. He was trained as a bombardier and was assigned to a B-17 heavy bomber in the 410th Bomb Squadron of the 94th Bomb Group. After flying overseas from Kansas, they began combat missions out of England over France, Belgium and Germany.

On his eighth mission, heading for German submarine pens at Kiel, Hale’s plane-a B-17 called “Old Tobe”–was hit by flak. Hale parachuted into the icy Baltic Sea where he was picked up by a German patrol boat. He was the sole survivor of the 10-man crew; most of the crewmembers were never found.

Although his captivity was about to begin, he was able to hide part of his escape kit in his clothing. Hale had received secret training at a British MI-9 intelligence school and was versed in making reports, sending coded information, and escape and evasion techniques.

Under guard, Hale was put on a train bound for Germany but he quickly escaped out a lavatory window. He was recaptured within a day–a guard told him, “Nice try, buddy.” He was interrogated, then sent to Stalag Luft III, the camp from which 76 British prisoners made their Great Escape after tunneling under the barbed wire fence. (Fifty were recaptured and executed; 23 were returned to camp; only three reached England.) Hale also helped excavate another tunnel but it was discovered before it was usable.

When the Russians closed in from the east, the Germans subjected the POWs to a 60-mile, mid-winter march by foot and rail deeper into Germany. They eventually were herded into a new POW camp, Stalag VII-A, at Moosburg, close to Munich.

The POWs were freed in April by one of General Patton’s armored divisions and by June Hale was back home.

On October 17, Blair Hale passed away following an extended illness. He was 87. He was a resident of Logan, Utah.

It is with great respect of Mr. Hale’s service to Utah and our country that the University of Utah is pleased to honor Blair Hale and his family on Veteran’s Day.