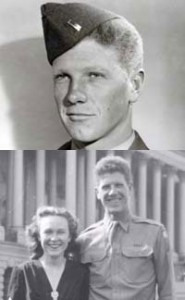 Mahoney, a native of Brigham City, was an ROTC cadet at the University of Utah where he trained with horse-drawn artillery. He was drafted into the Army in 1943. At Officer’s Candidate School, Mahoney was introduced to truck-drawn artillery and after receiving a lieutenant’s commission, was sent to the 276th Armored Field Artillery Battalion.

He sailed to Europe on the Queen Elizabeth, then the largest ship afloat and one of the fastest, and shared quarters designed for two people with 21 other officers. He was assigned to a tank named the Old Gray Mare and become a forward observer for the battalion artillery. Mahoney saw almost continuous action from then on. Once, however, he and a dozen others got Rest & Recuperation passes to the French city of Nancy. Mahoney got a new uniform and took the opportunity for a much-needed bath, shave, haircut and manicure. When he returned to duty, he stood out in sharp contrast to his disheveled, hungover companions who still wore their filthy clothes. Their colonel took one look and ordered, “No more passes.”

Mahoney’s unit, assigned to General George Patton’s Third Army, was in action during the Battle of the Bulge fought in the bitter cold winter of 1944. Then they pressed on into Germany, passing through the “indestructible” Siegfried Line that had been built to preserve the German heartland. Once, when his tank company drove into a German ambush, Mahoney saw the flash of a deadly German 88 and watched a tiny black speck come straight at him. The shell hit the ground in front of him, bounced within inches of his head, and continued on without exploding. In April 1945, Mahoney’s unit was driving full-speed down Germany’s four-lane autobahn when they approached a blown-out bridge. Three well-hidden antitank guns began firing, first knocking out tanks on either side of Mahoney’s, then hitting his. Many men died; Mahoney survived. The European war ended and Mahoney came home. He was with his wife in Washington, D.C., on his way to Fort Bragg and the invasion of Japan when Japan surrendered.