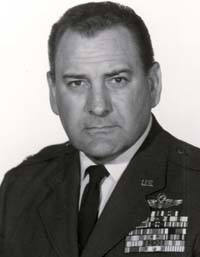 A Salt Lake native, Nelson played for celebrated coach Ike Armstrong on the University of Utah’s Sun Bowl team in 1941 – the year Japan bombed Pearl Harbor. In June 1942 he joined the Army Air Corps and trained in B-26 Martin Marauders, a two-engine attack bomber. When he finally went to Europe the war was winding down, he flew P-51 Mustang fighters on a number of combat missions.

It was evident early on that “Nails” had the eye of an eagle. In Korea, Nelson flew three-man B-26 Invaders, twin-engine bombers with eight 50-caliber machine guns packed into the nose that were used for some of the most hair-raising missions: flying at night below the level of the mountains to attack North Korean and Chinese truck convoys and trains. This kind of flying demanded nerves of steel and a tall measure of skill. For one such raid, Nelson was awarded the Distinguished Flying Cross. In total, he logged 53 combat missions.

Then came Vietnam. Nelson was in the cockpit of B-57s, two-man, twin-engine tactical bombers employed in night reconnaissance missions behind enemy lines and over treacherous terrain. During his tour in 1965-66, Nelson won an Oak Leaf Cluster to his Distinguished Flying Cross, the Silver Star and the Bronze Star, Air Medal with six Oak Leaf Clusters, and the Air Force Commendation Medal. In addition to the recognition of his flying ability and aggressiveness in destroying enemy targets, Nelson was also cited as an exemplary squadron commander, both admired and respected.

After 27 years and three wars, he retired from the Air Force. Sometimes when he’s asked why he decided to become a pilot, Nelson replies: “When I found out I was too lazy to work and too nervous to steal.” Nelson lives in Layton. And if you call him Floren, you may find out why he’s still called “Nails.”