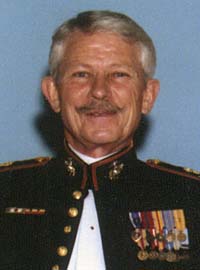 Pastore was born in Denver, but moved to Salt Lake City at an early age with his family. He elected to join the Marine Corps in 1943 after two years of high school. After basic training he was chosen for both the elite Raider school and Scout/Sniper school. He was assigned to the 3rd Marine Division and was sent into combat at the battle of Guam, a campaign that lasted from July to August 1944.

Next up for Pastore was Iwo Jima, one of the most ferocious battles in the Pacific war. After fighting their way ashore, the Marines encountered fierce and stubborn Japanese resistance. Pastore was wounded, transferred to a hospital ship, and was unable to return to his unit before the campaign, which lasted from February to March 1945, ended. Pastore was awarded the Purple Heart.

After the war, he served in the Marine Corps Reserve until the outbreak of the Korean War in 1950. He was in the lst Marine Division when it landed at Wonsan on North Korea’s east coast in October 1950. In November he was at the Chosin Reservoir in bitter cold weather. The Marines’ thrust toward the Yalu River was repulsed when the Chinese Communists surprisingly attacked in overwhelming numbers. Pastore was part of the epic withdrawal by Marine and Army units in December 1950 when they fought their way through the Chinese encirclement in snowy, mountainous terrain and in extreme cold to eventual safety at the port city of Hungnam.

In June 1951 Pastore was wounded a second time while in action on Korea’s central front. Once more he recovered on a hospital ship but did return to his unit.

After Korea he again entered the Marine Corps Reserve, eventually rising to the coveted rank of Chief Warrant Officer-4. When he retired in 1982 he had a total active reserve time of 33 years, 8 months.