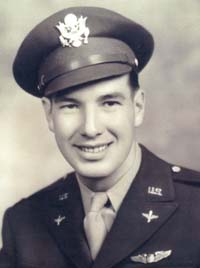 Patterson was born and raised in Colorado, went to California at age 20 to seek fame, fortune and more education. He was soon employed by Lockheed on the P-38 “Lightening,” twin-engine fighter assembly line. He attended night school and hoped to learn how to fly. The Pearl Harbor attack changed everything. He wanted to join the Army Air Corps and be a pilot, but received “Greetings from the President,” in the form of a draft notice that made him a Private. Still, he was accepted as an Aviation Cadet in late 1942 with the goal of becoming a pilot of a B-17 “Flying Fortress.” He graduated as a Pilot and 2nd Lt. in 1943 and assigned a crew in Salt Lake City.

The 10 man crew was in a B-17 named “Never Satisfied” based in Foggia, Italy and they flew bombing missions over Southern Europe. Their 16th mission was an oil refinery near Vienna. Before boarding their planes, his squadron commanding officer told an officer named Kirby to trade places with Patterson in the formation. Kirby’s plane was hit and exploded. Patterson’s was also damaged by heavy flak and lost two engines with gasoline from the ruptured tanks flowing in the open doors. They flew as far as they could in the steadily descending plane, and bailed out near Zagreb, Yugoslavia. Patterson was captured by a German cadre and became a prisoner of war.

After Budapest and solitary confinement, Patterson and his co-pilot were sent to Stalag Luft III near the border of Poland. Life was boring but not unduly harsh. They were on skimpy rations and were losing weight steadily. But Red Cross packages were shared as well as German farm produce. In January 1945, the POW’s were marched out to a rail center, loaded like sardines in box cars and sent to Nuremberg for two months. In April, they marched to a camp in Moosburg, where on April 29th a US Army tank smashed down the gate. They were FREE! Patterson and his crew returned home in late May.