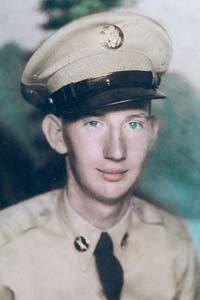 Pharr grew up on a farm in North Carolina and worked for a time in a furniture company. But Army life seemed like a better option, so he joined in 1949. After training he was assigned to a signal battalion.

When the Korean War started, his unit was first sent to Japan, then joined the invasion force that landed at Inchon in September 1950. In November, Pharr’s unit was attached to the lst Marine Division and sent up Korea’s east coast to Wonsan. A platoon – 135 men – from the signal battalion, including Pharr, was sent to Haguru, a village at the southern tip of the Chosin Reservoir, where the lst Marine Division’s headquarters was located. The group was to set up a voice and teletype communications system.

Pharr arrived the day after Thanksgiving and Hagaru was under heavy attack by Chinese Communist forces. That evening the signalmen were sent to take positions on what was known as Signal Hill, a prominent terrain feature at Hagaru. That night the tents and personal articles of the signalmen were destroyed by fire.

In temperatures ranging from 20 to 40 below zero, the defenders of Hagaru battled the surrounding Chinese. Pharr spent five days on the perimeter without shelter, surviving on frozen rations. During a firefight, Pharr was moving to a new position when he was shot in the leg and both bones were broken. Since it was not a critical wound, he was left in the snow until morning when he was moved to an aid station. By then his feet were frozen and his hands were frostbitten.

Pharr was placed on an ammo truck and sent to nearby Koto-ri where a landing strip had been cleared. He was flown out aboard a two-engine C-47 to an Army hospital in Osaka, Japan.

Pharr later joined the Air Force and served in Thailand during the Vietnam War.