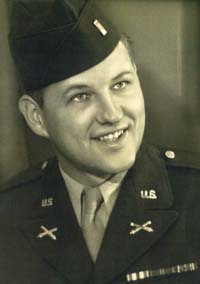 Salt Lake-born Robbins always wanted to fly. He got a pilot’s license in 1941 but when he entered the Army in 1943 he was sent to artillery school. He received a lieutenant’ commission in late 1943. He landed in France in August 1944 and by November was assigned to B Battery, 908th Artillery Battalion, 83rd Infantry Division. He was a forward observer supporting the 331st Infantry Regiment, in charge of a three-man team with a radio-equipped jeep.

His first combat action was in the Hurtgen Forest, where as FO he accompanied the commander of an infantry company engaged in marching fire to overrun the entrenched Germans.

Next came the Ardennes Campaign in the Battle of the Bulge. It was fought over 30 days. The Americans had little sleep and often-frozen food, and waged a constant battle for survival in deep snow and bitter strength-sapping cold. During this action Robbins was awarded the Bronze Star for his coolness under fire in breaking up a German counterattack.

Following the Bulge, Robbins’ combat team was part of 9th Army’s offensive toward the Rhine River. Indeed, his unit was the first to cross the Roer River and the first to reach the last barrier to Hitler’s heartland. The Germans resisted strongly and extensively. The American progress was slow, but inexorable. After Robbins’ battalion took a city, the Germans counterattacked with tanks and infantry. One company, with Robbins as the FO, was cut off but refused to give ground. From a third-story window, Robbins directed artillery and mortar fire for five hours, and kept the Germans from slipping into the position by firing at them with his pistol. For his initiative and courage, he was awarded the Silver Star.

After returning home, Robbins stayed in the Active Reserve , attaining the rank of Col., and received the Meritorious Service Medal Award upon retiring in 1977.