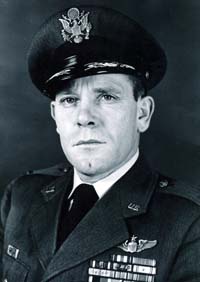 Emmett Davis was born in Roosevelt, Utah, the fifth of eight children. At age 10, he decided he wanted to be a pilot after watching the mail plane come and go from Salt Lake City.

In November 1940 Davis graduated as a second lieutenant in the Army Air Corps. He was assigned to Wheeler Field, Hawaii where a training opponent said flying against Davis was like trying to fight a cyclone. He still goes by that nickname today.

On December 7, 1941, realizing the airfield was under attack, Davis drove to the flight line and taxied planes away from the flames. He then drove to the armory, took out some machine guns, loaded them in a P-40, and was one of only a few pilots able to get into the air in an attempt to defend Pearl Harbor.

A year later, in action over New Guinea, Davis’ group shot down seven Japanese planes without a single loss. Another time, his flight intercepted two Japanese fighters, and gun-camera film from this engagement was used to train pilots in air-to-air gunnery. The squadron became known as “Cyclone’s Flying Circus.”

During action at the Philippines invasion, 16 pilots from Davis’ squadron fought in an air battle with approximately 100 Japanese. Davis’ group downed 18, and although he shot down four planes, he was credited with only two.

On August 9, 1945, the same day the second atomic bomb was dropped on Nagasaki, he led 62 P-38s on a low-level daylight bombing run without taking a loss. Japan surrendered four days later.

In 24 years of service, Davis attained the rank of colonel and was decorated more than 50 times. His medals include the Silver Star, Legion of Merit, and three Distinguished Flying Crosses. He flew 267 combat missions, commanded some of the most famous test pilot and fighter groups and wings in the Air Force, and introduced the F-86 into combat in the Korean War. He was working at the Pentagon and was up for promotion to general when he decided to retire.