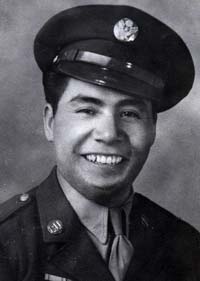 Epifanio Gonzales volunteered for the Army on January 3, 1941 because he felt a patriotic duty and wanted to help his family. He was assigned to the 19th Combat Engineer Regiment. After training, Gonzales landed in Arzoo, Africa, his regiment’s first battle experience. Gonzales’ unit participated in the North African, Sicilian, and Italian campaigns. In November 1942 it was part of the assault echelon in landings in North Africa. Over the next several months, his unit ­maintained major supply routes, repaired airfields, conducted “recons,” built bridges, cleared mines, dodged air attacks, prepared obstacle systems, and fought as infantry.

In February 1943 the battalion reorganized as infantry and dug in as part of the 1st Infantry Division’s defense at Kasserine Pass. On February 20, 1943, the battalion came under intense fire and suffered 117 casualties. For the remainder of the Tunisian campaign, the 1st Battalion provided construction and combat ­engineer support to the 1st and 34th Infantry Divisions and the 1st Ranger Battalion. A major part of the support was to keep over 360 miles of roads open. German General Erwin Rommel, the “Desert Fox,” came to regard the 19th Regiment as a “thorn in his side.” In the invasion of Sicily, the engineers cleared sections of beaches, provided bulldozer support, and knocked out pillboxes. Marching across Sicily, the engineers probed for mines, bypassed bridges, or occupied positions alongside the infantry.

During the fighting in Italy, the battalion was given one of the toughest missions of any engineer unit – supporting the 36th Infantry Division’s disastrous crossing of the Rapido River. In the bitter battle, the engineers built bridges in open terrain under heavy enemy fire, for which Gonzales was later awarded the Silver Star. After the Rapido battle – the worst he ever experienced – Gonzales was offered a battlefield commission, but declined it. He was also offered a Purple Heart after an accident but turned it down as well.