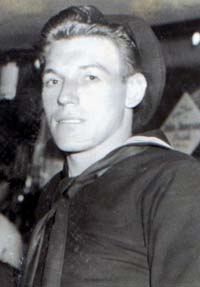 At age 16, Crit Killen ran away from the orphanage that was his home. With a forged birth certificate and paperwork signed by an uncle, Killen enlisted in the Navy just weeks before Pearl Harbor was attacked by the Japanese. He waited almost a year to be assigned to a combat ship. He first served as a gunner aboard the USS Straub, a destroyer in the North Atlantic that was protecting convoys bound for the Mediterranean.

Next, Killen spent two years patrolling the coast of Argentina in search of German submarines and blockade-runners. On one occasion, the Straub’s sonar detected a German U-boat off the coast of South America. The Straub launched a depth charge attack, sank the sub, and captured some of its crew.

By the fall of 1944, the war in the Pacific had generated a need for destroyers and cruisers to protect carriers and support forces attacking the island beaches. Killen’s ship was sent to the Pacific to hunt Japanese submarines and lend support to amphibious assaults.

When the war with Japan ended, Killen moved on to occupation duty. After completing his enlistment, he became a civilian but within months he returned to the Navy.

During the Korean War, Killen’s ship engaged shore guns in savage exchanges at the North Korean port of Wonsan. One time his ship was struck five times by shells, briefly putting it out of action. After cursory repairs, it returned, barely seaworthy.

After years at sea, Killen was assigned to teach a leadership course and was named instructor of the year. Later, he helped develop the Navy’s 3M school to teach new officers. After 24 years of Navy service, Crit “Moose” Killen retired as a chief petty officer. In reflecting today at age 81, he thinks retiring was the “biggest mistake of my life.”