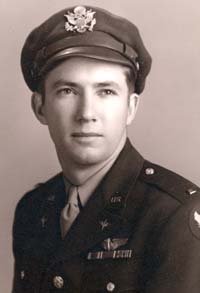 When the Japanese attacked Pearl Harbor in 1941, Stanley Krushat was 21 years old. Three months later, he enlisted first in the U. S. Navy but then decided to join the Army Air Corps and was sent to bombardier school. In 1943, he was commissioned a second lieutenant and was sent to Salt Lake City to join his crew. In 1944, his crew joined the 15th Air Force, 463rd Bomb Group in Italy.

Their first high-level ­mission took place over the Ploesti Oil fields of Romania, the biggest source of fuel for the Nazi war machine. On his 15th mission, Krushat’s aircraft encountered heavy flak on the bomb run and took its first hit just after “bombs away.” After two consecutive hits to the left wing, Krushat’s aircraft caught fire, forcing the 10-man crew to bail out at 24,000 feet. After a 15 minute decent, all 10 members made it safely to the ground. Krushat landed in a field where he was met by Romanian farmers who ­immediately called for troops. The soldiers tied his hands behind his back, knocked him to the ground with the butt of a rifle, and forced him into the back of a wagon with his head and legs hanging out. After a daylong ride, he was reunited with the other members of his crew. Krushat was interrogated for several days and moved to Luftstalag, a POW camp where he stayed for the next five months. After the peace treaty was signed, what followed was possibly the greatest evacuation of prisoners in United States history. The Army flew B-17s supported by P-38s, and P-51s into Romania and touched down in Bucharest. They proceeded to load all 11,000 prisoners from the 15th Air Force. The 463rd Bomb Group was awarded two commendation citations from the President for their exceptional performance during the Ploesti bombings. Krushat was awarded a Purple Heart, an Air Medal with Oak Clusters, and a POW medal.