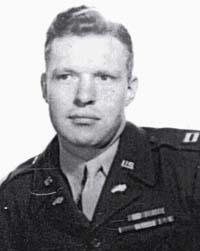 Brit McConkie was born in Salt Lake City. After high school, he entered the University of Utah, enrolled in the ROTC program, and was commissioned a second lieutenant in field artillery just months before the bombing of Pearl Harbor. He had a succession of assignments and promotions during 1942-43.

In September 1944 McConkie and his battalion sailed from Boston to Cherbourg, France, and continued training on the beaches of Normandy until November when they were committed to battle in Luxembourg. On December 16, German forces initiated a major offensive – the Battle of the Bulge. McConkie’s 811th unit moved into Belgium to help in the hardest hit area of Bastogne. They remained there for almost three weeks repelling the German forces.

In January 1945 McConkie suffered a shrapnel wound in his shoulder during the last day of the Battle of the Bulge. He was sent to a hospital in England where he spent three months recovering. McConkie was then assigned to staff duties in Austria.

He received the Purple Heart and the Bronze Star, and was cited for outstanding leadership for constantly exposing himself to enemy fire. He received the Soldier’s Medal for heroic actions on May 12, 1945, when the boxcar of a train filled with munitions, which was stopped on the track in the middle of a small Austrian town, caught fire and exploded. McConkie helped separate the car from the rest of the train, preventing the adjacent rail cars from exploding, which would have destroyed the whole town.

Two days after the war ended, he and some buddies were the first to enter the Ohrdruf concentration camp. They saw the operating rooms and medical equipment where experiments had been performed on the prisoners. People there were dying at a rate of 100 per day and the stench of death could be smelled two miles away. Although he had his camera, he was unable to bring himself to take any photos. They offered the people soup and tried to help but many were too weak to eat.

McConkie was shipped home, promoted to the rank of major, and assigned to the Honorary Reserve, a privilege granted to him as a result of a permanent disability caused in action.