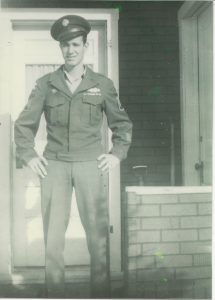 Staff Sergeant Carl Workman, in the middle of his junior year at Park City High School, received his draft notice inducting him into the United States Army.  The son of a blacksmith from the snow-packed Wasatch Mountains, Workman was pulled into the wartime frenzy of a nation locked in a bloody death-grip with both Nazi Germany and the Empire of Japan.  “I would have enlisted anyway,” he remembers. “Pearl Harbor had just been attacked. I was eager to go and get into the fight.”

The lean, strong boy from the Rocky Mountains trained hard at Fort Douglas, Utah, and then in Alabama, California, and Hawaii, eventually becoming a Heavy Mortar Crewman.   Next, was assigned to the 106th Infantry Regiment, as part of the famed 27th Infantry Division, also called the “New York Division.”  “I was the only boy from Utah in a division of over twelve-thousand, street smart, big city kids. But it didn’t matter, we were all Americans.”

Assigned as a forward observer in a mortar platoon, Workman hit the violent beaches of Saipan in June, 1944.  He found himself crouching in a foxhole set out fifty yards from the line, holding a field phone and binoculars, calling down fire on the Japanese soldiers who were determined to fight to the last man.  “Three-thousand screaming Japanese soldiers attacked us head-on in one single Banzai charge. I called back to set the mortar tubes at 50 degrees, then fired fast as we could. We killed them all.”  The U.S. won the battle, but at a heavy cost to both sides.  All of the 29,000 Japanese troops died, and of the 71,000 Americans in the operation, 3,426 were killed and 10,364 were wounded.   Only nine of the 200 Soldiers in Workman’s unit survived.  After Saipan, he went to the New Hebrides islands in the Pacific, where he trained newer Soldiers, but in April 1945, Workman found himself in another major battle.

His next fight was the invasion of Okinawa, the largest amphibious assault and one of the bloodiest battles in the Pacific Theater. For two-and-a-half months of ferocious battle, Workman endured the horrors of cave fighting, Banzai charges, sugarcane field ambushes, and flame-thrower warfare until the last round was fired.  Again, losses were tremendous, and the U.S. defeated the Japanese in the last battle the 106th fought in WW II.  After the war ended, he was sent to occupy the town of Shibata, Japan for four months.

Now at the age of 94 years, Staff Sergeant Carl Workman still reveres his nation and its flag with intense patriotic fervor. “I’d still kick-in and fight for America in whatever way I can. Maybe I could drive a truck and deliver ammo to the front lines. Whatever she takes, I’ll do it.”