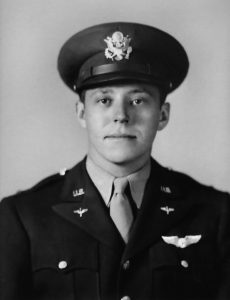 Second Lieutenant Jack Whipple, piloting a fully loaded 15,000-pound glider that had just been released from its tow plane, was in trouble.  He was fast approaching the designated landing zone and realized it was too small.  Whipple brought the powerless plane down fast, jammed a wingtip into the ground, throwing the glider into a ground loop.  The quick action kept it from crashing into trees bordering the landing zone.  The crew and soldiers grabbed their combat gear and prepared to unload the cargo, but the bolts holding the heavy equipment couldn’t be dislodged.  Using explosive primer cord to blow off the tail section of the glider, the cargo was released and shoved out.  All of this was behind enemy lines inland from Utah Beach.  The supplies were delivered to the 82nd Airborne, which had dropped in during the early morning darkness.  It was June 6, 1944 – D-Day.

Whipple and his crew fought alongside the paratroopers until detailed to assist getting the wounded to an evacuation point.  All of them were ferried to England; the wounded were transported to medical care and the glider crews to their bases.

He flew two more glider missions that were similar complete with landing problems.  The second flight was in support of paratroop operations in the Netherlands.  When Whipple arrived at the landing area, a cow wandered into the designated landing spot, turning the operation into a game of chicken, but disaster was averted when the cow moved, realizing it was game she couldn’t win.  Whipple’s final mission was to support the Americans crossing the Rhine River into Germany.  Prior to the gliders arrival, Allied ground troops released smoke to obscure their position.  The smoke enveloped Whipple’s glider, but he was able to use his instruments to navigate into clear air just before hitting his landing zone.  It was Whipple’s last glider flight, but his war wasn’t finished.  Returning to the job he was originally trained for, he flew 12 resupply and evacuation missions in C-47s as navigator. On two of those, he doubled as co-pilot because they were short-handed.

When the war in Europe ended, Whipple was placed on orders for shipment to the Pacific but the atomic bombs ended those plans, and Whipple’s warrior days were over.

Second Lieutenant Whipple, who received three Air Medals, said that during the war he never thought about the purpose of the war or the enormous stakes.  He said, “I was too busy looking for places to land.”  These days he also adds, “There ought to be better ways to solve problems like that.”