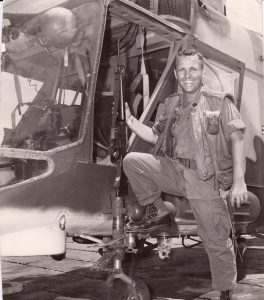 Captain Richard Van Allen was trapped between two layers of darkness. One was the night sky, the other was the South China Sea. The mission was to search for and rescue survivors in the cargo plane wreckage below. He and his crew didn’t know how many people were on board or what the load was.

When the ships arrived and dropped aerial flares to light the area, Van Allen’s first thought was he was in a snow storm. It was actually large pieces of Styrofoam swirling around the plane. They were from ammunition crates that had broken open. Some were in the plane, some bobbing below in the water. Lying below, there was about 50,000 rounds of anti-aircraft ammunition that could have exploded if the leaking fuel from the wreckage had been ignited by flares or electrical sparks.

Van Allen first used the wind blast from the rotor blades to blow away some of the Styrofoam. The flares were both a help and dangerous hindrance. Some would fall into the water, with the risk that it would ignite leaking fuel. Others would burn out A100 feet off the water.  “You had to dodge in and around the floating chutes which were almost invisible in the darkness, to keep them from entangling in the rotor blades,” says Van Allen. The hazardous operation went on most of the night, with refueling trips back to base.  At the end there had been seven crewmen. Two, including the pilot who had been blown sideways out of the cockpit, were rescued.  The other five died.  Captain Van Allen earned a Distinguished Flying Cross that night.

Van Allen, trained as a fix wing pilot, fighter pilot, and helicopter pilot, spent much of his career in search and rescue. One thing he knew for sure, you never knew what you might run into.  For instance, a routine pick-up of Green Beret soldiers turned into a two day effort. The soldiers showed up with 100 mountain tribesman they had rescued from the Viet Cong, complete with chickens and livestock.

His last assignment was at Hill Air Force Base where he had multiple responsibilities. The most visible was an Air Rescue unit he established to rescue civilians. At that time civilian agencies didn’t operate their own helicopters. His first mission was to assist in the Teton Dam disaster in Idaho. The first 12 months they flew 700 hours in civilian search and rescue missions.  The first was to Idaho’s Teton Dam break. He also flew numerous rescue missions into the Cascade Mountains of Washington.

Major Van Allen earned numerous medals for his flying exploits, but the biggest reward, he says, “was the look of gratitude and relief on the faces of those that had been plucked from danger.”