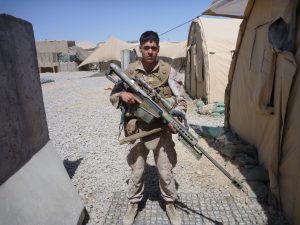 Sergeant Chris Rowley was attending the University of Utah when he decided he wanted to give back to the country that offered him and his parents so much opportunity, so he enlisted in the Marine Corps Infantry in September 2008. He became an Anti-Tank Missileman and was assigned to 1st Battalion, 9th Marines, which deployed as part of the 24th Marine Expeditionary Unit (MEU) in 2010. The MEU conducted humanitarian operations in Haiti and support and training operations in Africa and Kuwait.

In September 2010, Rowley attended Scout/Sniper training and was assigned as an Assistant Team Leader.  In May 2011, his unit deployed to the Helmand Province of Afghanistan, where his team conducted Reconnaissance and Surveillance missions. During the demanding multiday missions, they would insert at night, find a hide site, and begin surveillance. While returning from a mission, the team was ambushed, receiving machine gun and rocket propelled grenade fire from multiple positions. While attempting to break contact by instructing his team to peel out of the kill zone, Rowley was shot in the leg after providing covering fire. While under intense small arms and RPG fire, Rowley neutralized the closest enemy position with a grenade launcher. This allowed the rest of the team to move to a covered position with smoke to screen their movement, while a tourniquet was applied to his bleeding leg. Laying down heavy fire with his carbine as he limped to the covered area, Rowley expended five magazines of ammo until the enemy fire subsided. He received a medevac to Camp Bastion for surgery. After another surgery, Rowley had the option to go home but chose to recuperate in country. He said, “The physical therapy of learning how to walk again was grueling, but the anger of not being able to take care of my Marines overrode the pain.” A few months later and ahead of schedule, Rowley rejoined his team.

A week later, they were assigned the mission of providing overwatch to patrols in a particularly hostile area where Marines were taking heavy casualties. While most teams had missions every third day, Rowley’s team conducted missions every day for a month without rest, often conducting 4 patrols a day. During this month, Rowley conducted more than 100 patrols, more than some Marines do in an entire deployment. Casualties in the area virtually ended when the month-long mission was completed.

In 2017, Rowley was discharged due to worsening combat injuries. Looking back, he said, “It was a tremendous privilege and honor to lead Marines – some of the finest people this country has produced.” The Purple Heart recipient is currently a senior in the U’s Nursing program and plans to work for the VA after graduation.